After three years running the Dyno, Vince & Josh began working for Penske Racing, where they traveled around the country with the Racing School. The cars they worked on were IROC stock cars, Formula cars and Mustangs.

Josh took it a step further, working in the engine shop of the most successful race team in the world....Penske Racing IRL engine program.

BMS began out of a need to be creative and work with a variety of engines. Their love to defy the norm and standards of today's racing technology resulted in the creation of BMS Racing Engines!

Vince & Josh have built a successful engine shop of their own in Plymouth Meeting. They build all types of race engines including road race, sprint cars, super stock, forced induction, nitrous, drag, pro street and Marine.

BMS is moving into the Marine Industry at a fast pace, teaming up with Swipes Wipes owner Dan Dillon (who is already a household name in the boating industry). In our first full season with Dan and driver Tom Richmond, we have won the North America Championship in Cambridge, Maryland (Pro-Stock Class).

BMS is also building a large number of Import combinations.  At any given time you will find numerous  Hondas, Subarus and Nissans getting machined and built in our shop. 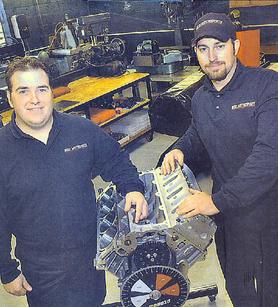 ​BMS was started by Vince Iacavino and Josh Debickes in a one-car garage! Work was done on nights and weekends, and all machine work was subbed out. Engines were only assembled by Vince & Josh.

Vince & Josh have a love for motorsports. In Fall of 1996, they both enrolled at Luzerne County Community College the only secondary school that offered a degree in motorsports at the time. Two years later, both with a degree in Motorsports Technology, they started on their way. Josh worked with a TOP Alcohol Funny Car team and Vince with an SCCA Pro road race team. One year later they teamed up to work at Recon Automotive in the Dyno Room. Together they have probably dynoed more engines than anyone else in the country.